Out of the Shadows (Love, Lies & Consequences Book 4)

My tenth book will be released in seven days! I'm really excited about that, but I'm also somewhat sad. Out of the Shadows (Love, Lies & Consequences Book 4) will wrap up this series for now. Who knows? I may revisit this series in the future, but for right now, I must move on. This is my first complete series and I'm excited to share it with the reading community. All major characters stories have been told, if not, there will be spin-offs into different series.

I've spent the last few years developing Raegan, Rico, Caleb, and Chloe's characters and I believe this is a satisfying end. I'm almost certain this is an ending you didn't see coming because I surely didn't. Who would've thought it would end this way when I started writing this series several years ago. One fun fact about this series is that I never planned for four books. When I started, I committed to writing two books in the series, but as time went on and book two developed, I knew there would be a book 3. With the way book 3 (Shattered Vows) ended, I knew there had to be a book four!

Join me in wishing these characters farewell (for now) by purchasing your copy of Out of the Shadows (Love, Lies & Consequences Book 4)!

Here's the blurb:
A year after Rico's death, Chloe is still working to piece her life back together after learning of his betrayal and sickness. Though she wants to be with Shane, she senses that it may be too soon to move on, given that she is broken inside. After recommitting her life to God, she learns to love again, but just when she thinks she's over the past, Raegan resurfaces. Rico's lies initially introduced them to one another, but Chloe's mother has an even bigger lie that has remained hidden for over thirty years. Can Chloe handle it? Will she allow yet another secret to keep her from experiencing the love that Shane is so willing to give?If she allows God to mold her heart, out of the shadows of her pain will come love, forgiveness and a sense of peace unlike she's ever known. 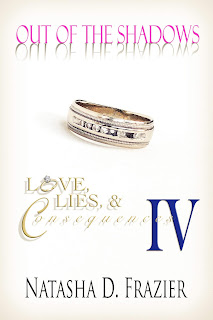